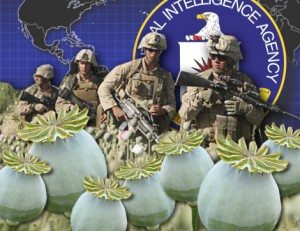 • Across the U.S., heroin use has skyrocketed. But how are these drugs getting into the country, and is the CIA back to its old tricks, using drugs money to fund covert operations?

The tragic overdose death of Academy Award winning actor Philip Seymour Hoffman on February 2, brought renewed interest to the subject of cheap heroin on America’s streets. Across the country, heroin use is on the rise, despite the billions of dollars spent by United States law enforcement fighting it. Recently, southwestern Pennsylvania suffered 22 overdoses in little more than a week’s time from tainted heroin, and dozens of users were hospitalized in Camden, New Jersey due to a highly potent batch that was being sold on the streets of that city.

One of the big questions asked by naïve media talking heads is: Where does all of this heroin come from? The answer is the same as it was a decade ago following a Central Intelligence Agency (CIA)-led invasion of Afghanistan: 75%-80% of the world’s heroin is exported from Afghanistan. In spite of the fact that the U.S. military controls a great deal of that mountainous country, production levels hit record highs last year.

Since American forces have been entrenched in Afghanistan for a dozen years and have squandered over $700B to date, AMERICAN FREE PRESS has long been one of the few publications to openly address a highly taboo subject. Namely, elements within the CIA having been heavily involved with illegal narcotics trafficking since the Vietnam War in the 1960s and 1970s and Iran-Contra in the 1980s.

On March 13, this reporter contacted investigative historian Robert Morrow, whose research into the murder of CIA-sanctioned pilot Barry Seal is unparalleled. Seal claims to have run drugs for U.S. intelligence.

When asked about official criminality associated with Afghan’s opium business, Morrow replied: “U.S. government involvement in the drug trade ebbs and flows depending on a particular administration’s level of corruption. If a Bush or Clinton is in office, you better believe it’s rip-roaring.”

Morrow provided more insights. “Or, maybe their complicity is so institutionalized that presidents don’t even control it. Intelligence agencies and the military do. The government has many faces. OneDEA [Drug Enforcement Administration] agent could be entirely honest while another is on the take from drug cartels and the government.”

Delving into deep state secrets, Morrow stressed: “The people who ran all the drugs into America during the Iran-Contra era were George Bush, Sr., CIA Director William Casey, Oliver North and both Clintons. Airports like the one in Mena, Arkansas that Bill and Hillary operated stretched all across the southern U.S. You need to remember that Barry Seal [who allegedly flew more cocaine into America than any pilot in history] was personal friends with Bill Clinton. He also spoke with Bush, Sr. on a weekly basis.”

Ending on a riveting note, Morrow said: “These topics aren’t expressed in the mainstream media because it would be detrimental to the government’s credibility. Nobody is supposed to know that certain elements running our country are drug dealers, murderers and thugs.”

In terms of CIA links to the Afghan heroin trade, Henderson said: “They’ve been running it from the get-go, all the way back to when the Mujahideen were formed. It’s been the same game starting withJimmy Carter’s people through Reagan, the Bushes, Clinton and now Obama.”

Henderson provided more details: “After the Vietnam War when heroin stopped coming out of the Golden Triangle, the CIA set up bases near Afghanistan in the late 1970s. CIA asset Osama binLaden helped train these men, and soon warlords were planting poppies. It doesn’t take a rocket scientist to figure this out. Obama’s advisors work for the same neocons as did Bush’s. These same people do the dirty work.”

Victor Thorn is a hard-hitting researcher, journalist and author of over 50 books.

Recent coverage of the congressional battle over Central Intelligence Agency (CIA) snooping on the Senate Intelligence Committee has served to obscure the real story of the CIA’s misdeeds and the demands to cover them up.

For example, in 2010 and 2011, there were credible reports of the CIA running a “black site” in Somalia, even though President Barack Obama issued a 2009 presidential directive banning torture and ordering the closure of all secret black sites used by the CIA. However, the White House cleverly worded the directive to ensure it did not limit detainees being secretly interrogated in countries that routinely use torture.

Instead of making the CIA accountable, Obama has failed to allow the public to see an inter-agency task force report on “the agency,” which he commissioned in 2009, and never displayed any inclination to expose the torture used during the Bush era. On the contrary, as President-Elect Obama, when asked about the issue, he told the American people it was better to look forward and not back.

Obama knows what the CIA has hidden in its files and has no appetite to make this information public. But it is not only the CIA that would like him to stem the tide of demands by some members of Congress for access to all the CIA torture material; there are governments in 54 countries that aided the agency in the rendition and torture of suspects and they want this issue to go away. Thenames of the countries are known but not the names or the numbers of suspects the CIA processed through its black sites.

There are intelligence figures in European nations, including Polandand Lithuania, who fear they could find themselves hauled before theHuman Rights Court in The Hague should the CIA spill its secrets. There are others in Britain, Ireland, Austria, Belgium and Spain, to name but a few European nations, who facilitated rendition that led to torture. They, too, worry they will be charged with abetting torture.

A stark example of how the CIA operated after 9-11 was a black site on an army base in Poland where detainees were waterboarded and subjected to a range of tactics that constituted torture. The CIA personnel who set up the site, picked up $15M in cash from a diplomatic pouch in the U.S. embassy in Warsaw so they could renovate the site with special cages.

CIA personnel then refused to sign papers for that site, knowing they were breaking international laws.

So when the media focuses on whether or not the CIA spied on a congressional committee, it loses sight of the bigger picture, which is the sheer lack of information made available to the American public on the use of torture at black sites on land and on ships and the role played by the CIA when it used foreign intelligence services to torture suspects.

A retired European intelligence officer familiar with the CIA’s recent history, agreed to speak to this writer on condition of anonymity. He felt certain the congressional committee would eventually release a sanitized version of the information it saw, and doubted whether the whole congressional report would ever see the light of day.

“The CIA is not worried by the media’s coverage of the work of the congressional committee because it takes the focus away from the big issue, which is all the black stuff the agency has been doing since 2001,” he said. “That’s the jewel the CIA and White House will protect at all costs. You simply cannot separate the bad behavior of an intelligence agency and its political masters, whether Bush or Obama.”

Richard Walker is the pen name of a former N.Y. news producer.

By Richard Boyden in America, CIA, heroin on July 30, 2016.
← Jew Raping Pedophiles Epstein and Dershowitz Connection To Serial Rapist Pedophile Bill Clinton Terrifying Judgement Of WW 3 On America As Revealed By Jesus And Why! →