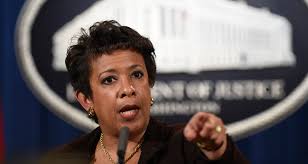 To start with, in what I am sharing below and the labeling of Obama’s Attorney General as a “House Nigger” is the result of what I learned in my “African American History” class. In hearing Malcolm X expound the meaning of…it leaves no doubt in my mind or should it anyone else’s that United States Attorney General Loretta Lynch is the perfect example of a “House Negro”. And besides it appears that given Lynch has no problem with the history of the racist murdering word “REDSKIN” as applied to Native Americans but rants whenever the word “NIGGER” is used, then for me…when a mostly all Black football team owned by a “JEW” calls their team “REDSKIN” I am comfortable in knowing I am more then “politically correct” calling her a “House Negro/House Nigger”.

Lets get to the MEAT! Ya ready?

When Lynch’s “boss” has a “best friend” as his “Middle East Adviser” who is DOCUMENTED to be directly connected to the cover-up of the murder of Black Civil Rights worker Perry Ray Robinson Jr. in 1973 at Wounded Knee SD by the American Indian Movement…you have a major problem with not only “legal and personal” job credibility but your racial identity as being “Black”!

“Houston we have a problem”!

So it is with Lynch. Obama’s “Middle East Adviser” is James Abourezk, former Senator from South Dakota. James was the handler/friend/and accomplice in the cover-up of Robinson’s murder by his American Indian Movement murdering raping pedophile infested “brotherhood” of “PreTendians”! It was their hierarchy of Dennis Banks, Clyde Bellecourt and Russell Means who knew all about Robinson’s murder. YIKES…they even called him a “NIGGER” before they shot him!

Starting with Banks. He not only was at the Wounded Knee “staged political event” pimped by the “Synagogue of Jew” media as the “siege” protesting oppression and racism by the Oglala Sioux Tribe IRA Government but it was Banks who gave the order to shoot “that loud mouth nigger….” Robinson to David Hill. After Hill shot him, he was allowed to bleed out. The FBI was there believe it or not which is why they gave Hill a “free pass” by Lynch’s DOJ through their FBI Agent In Charge Joseph Trimbach Jr. who had their eyes and ears on the inside who also witnessed Robinson’s murder. His name was Douglas Durham who slept in the same “inside information bed” with Dennis Banks for a year as his trusted butt buddy.

So with this information being “hidden” up to recently…we see once again the FBI confirming they are still this countries leading pathological lying to cover up any and all crimes such as murder exposing government officials in high places DOJ “joke” and they proved this by issuing a statement in 2014…41 years after his murder…that they “now believe” Robinson was murdered by the American Indian Movement!

In contrast to their deliberate and corrdinated for 40 plus years to hide the murder of Robinson and others at Wounded Knee and others after by AIM…they still continue to lament, weep and wail, and nash their teeth over the murder of their 2 FBI agents in 1975 on the Pine Ridge Indian Reservation allegedly by Leonard Peltier while to this day they continue to “racially profile” Robinson’s murder into a state of “abrogating Tribal sovereignty” if they were to dig up his remains! Of course…a direct descendant of George Custer is lock stepping with the FEDS in this…yea…Tribal Chairman John Yellow Bird Steele!

The real reason for this continual stonewall by the FEDS and LYNCH and the DOJ…is to protect Obama’s and Abourezks connected butts by ignoring the documented location at Wounded Knee because that would be very very embarrassing if not CRIMINAL if all the Robinson’s remains were found. Banks told Floyd Westerman’s son Chis to bury him near the Wounded Knee Creek! Witnesses galore…tesimonies…but…of course nothing has been done and in my opinion never will be. After all…when Dennis Banks…yea that flaming pedophile and FakeIndian…states in a interview that he did not remember seeing a Black man at Wounded Knee…then that is set in stone because he knows the FBI will forever protect his lying murdering soul!

Another prime example of FBI “Professionalism” Indian Country style is when they lied about not knowing anything about the rape and murder of First Nations Warrior Woman Annie Mae Aquash by Abourezks “thugs” AKA American Indian Movement in 1975 on Pine Ridge. The shooter was now convicted John Graham. The FBI knew what was going on with her day by day. They had another inside man involved. His name was…is…Charlie Abourezk….adopted son of James. Charlie was on site at Bill Mean’s house…Russell Means brother.

While there Annie was beaten and I am going to say…GANG RAPED AIM STYLE! Trudells attorney was there too…Bruce “I plead the 5th as the BITCH I AM” Ellison. Then she was she was tossed in the back of a Pinto…driven just north of the village of Wanblee on Pine Ridge and while praying…had a bullet placed in her head just behind her ear. She was pushed over the cliff still alive…yea…think about that those reading this. Bleeding and freezing to death compliments of Senator James Absourezk and his CRIMINAL BROTHERHOOD! Rumor has it that Charlie or James made a statement to the effect about WHERE the bullet was placed in her head before that information officially came out.

Again the FBI comes forward with their one of a kind “reality shows” which had to be voted by Satan as one of the most blatant orchestrated by Him lies of that time. The after Annies body was found…pretended…say LIED…that they did not know who she was. (Banks and Trudell did before they did in “testimony” by Trudell) So in scene two of “We will fool everyone”…the FBI cut off Aquash’s hand and shipped them to DC to identify this “jane doe”!

Over time it has been revealed that Abourezk’s buddies Banks, Trudell, Means, and Bellecourt were all in the know because they all agreed to have her assassinated because of what she shared about the REAL American Indian Movement (i.e. their rapes, murders, pedophile, and drug activities as well as the millions they were stashing in foreign bank accounts with her “trusted friend” and Chairman of AIM John Trudell at his home in 1975.

No sooner had she left his home, Trudell made calls to Abourezk, Banks, Bellecourt, and Means and the collective decision was made that she was a “threat” and needed to be offed.

Lynch needs to be asked WHY in 2011 did South Dakota Attorney General Brendan V Johnson call off the investigation taking place by Rod Oswald who a was criminal investigator put in charge to investigate all the above murders as well as the over 40…up to 100 unsolved murders on Pine Ridge including that of Robinson.

Lynch needs to be asked WHO gave that ORDER?

Only ONE “man” that I can think of and why?

Say Obama because of his connection to Abourezk who was in the know about the murder of Robinson and every other murder at Wounded Knee by AIM which implies of course that Obama knew about Robinson’s murder and the others going back how long?

Lynch needs to ask the Robinson family KUZMA why he ignored my call and at least 6 others with information showing exactly WHERE Robinson is buried! Why did KUZMA tell Robinson’s family to ignore this information unless he is also working for the FEDS!

Can’t forget to mention the appointed by Clinton Black Judge named Michael Davis who has been friends with Co-Founder of AIM Clyde Bellecourt for well over 30 years and by “association” is ALSO in the know but remains silent…or…if he did not know…he knows NOW! Hmmm….

I made sure the The Congressional Black Caucus also KNOWS! They “Banned ME” from their Facebook page! No wonder nothing from any of them them on behalf of Robinson’s family. More “House Negro’s”…

I made sure the NAACP KNOWS!

And of course…the infamous HONKY HATIN bad ass all talk no action BLACK PANTHER PUSSY PARTY boys and girls know. I contacted them. Promised me…one of the “legend in their own minds” Chairman’s said they were going to publish a story about…consider going there to get his remains. Guess what now? Can you hear a pin drop?????

Remember that song…”Somebody is watching you”?

Add these together and then you have one word that applies to them…COMPLICITY! Complicity in the cover-up of Robinson’s murder and where he is buried!

And what I am sharing ain’t about me ya all! Say God…say He who records in intimate infinite detail each and every LIE and MURDER by those who are “owned by Satan”…and in so committing are his “devils” in the realms of time and will be in the realms of eternity. Know that nothing will escape His eye and His PROMISED PUNISHMENT affixed for such crimes with His justice and judgement claiming those guilty of murder upon their death. And they think that their “secrets behind closed doors” will be forever hidden!

So if you the GUILTY are reading this…just know that I am but a “messenger of this Eternal Truth” knowing that YOU will not repent and confess your sins of said murders etc. I am sharing this so that in reading this…you now know what will be your spiritual state once your spirit leaves your bodies upon the death of as taught me by my Teacher…Jesus Christ…even He who you blaspheme in all that you have done to His children in the name of your ‘god”…SATAN who you call LUCIFER and who will own you in the Lake of Fire and Brimstone even as he owns you now!

By Richard Boyden in Uncategorized on March 11, 2016.
← This Renews My Willingness To Protect Those I love If That Time Comes Obama Is The “Mansurian Candidate” Islamic Enemy Of America →