Update:  Jon Hammar was released the Friday before Christmas 2012. This article was in part responsible for Jon being released and which was read by the Department of Defense and the State Department.  Also this article was HACKED/DELETED by a hater of all things American, Scott Prentice who owns Black Hills Publishing. Prentice is also a race hater of American Indians who he calls “savages”. His Freemason mindset is in harmony with the likes of the KKK. Click HERE to read about who Prentice is. 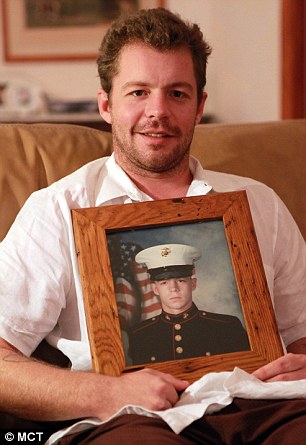 United States Marine Jon Hammar served in Iraq and Afghanistan. The internalized and festering underneath his outer shell combat related trauma that followed him home led to his decision to take a vacation to Costa Rica. Some combat Marines dealing with PTSD like Hammar call a dream vacation like this a “mental health break”. Hammar had conferred with his parents and they agreed together that a trip to Costa Rica offered hope that the Hammar’s nightmares containing real life reality show reruns of the death of his Marine Corp brother would be at least partially deleted and replaced with new experiences and memories that would help relieve the heart wrenching pain he was daily dealing with. They together believed that by immersing his wounded heart and spirit in a new environment, he would finally begin to heal. Of course…this is something President Barack Hussein Obama is not able to comprehend because he has never been shot at or seen “one of his own” take a bullet in the head.

Marine Jon Hammar did not enter into a friend of America country on his way to Costa Rica. Instead on August 23, 2012, he and a fellow Marine and friend entered into a Mexico that acted like the Muslim Brotherhood in their treatment of him. Obama and the State Department knew full well that Hammar was kidnapped…no…taken prisoner, by a police force that is on the payroll of the cartels who own and operate a hell hole prison called CEDES where Hammar was placed and is located in Matamoros Mexico. Matamoros is documented to be a drug cartel infested drug trafficking and logistical center right across the border from Brownsville Texas. It is also the traditional home and stronghold of the CDG (the Gulf Cartel). The CDG and Los Zetas are locked in a bloody war for control of the lucrative “Plazas” (drug trafficking routes) into the state of Texas.

One notorious public display of Matamoros being the quaint Mexican border town that it is, took place in July 2010 when 12 Mexicans, 1 woman and 11 men, were tortured, shot dead, and laid out on a main town road like so many hunting trophies by one of the drug cartels. One American was singled out for the most brutal torturing and murdering experience that only Satan could inspire.

These are the kind of Mexican citizens who operate freely in Matamoros and are in collusion with the police force that arrested Hammar. It should be pointed out that Hammar was not trying to enter Mexico illegally, transport drugs in to or from, or sneak illegal immigrants back into the US. Neither was Hammar working as an “operative” for Obama’s and Eric Holders Justice Department’s “Fast and Furious” program and got caught attempting to hand out assault weapons to the cartels for big bucks. If that were the case, Hammar would of had a cartel escort to Costa Rica.

Instead, Hammar was arrested, beaten, tortured, jailed, and chained to a steel bed on trumped up charges of having an “illegal weapon” according to the cartel controlled police in Matamoros. How illegal? Say 1″ length of a antiquated shotgun barrel which length was deemed legal by U.S customs authorities to take into Mexico before Hammar entered into Mexico.

The questions needing to be asked in light of what has happened to Marine Jon Hammar four months ago, why does the Obama supporting left wing liberal media continually feature Obama and his wife thanking members of the military for their service, offering condolences to those who have lost their lives such as members ofSeal Team 6 with tokenistic self serving rhetoric while at the same time, they intentionally ignore the plight of this Marine who has served his country? And why has Hammar been officially classified as being of no importance for four months by Obama and the Government of the United States yet on Dec. 9th, Obama gave the green light for Seal Team 6 to rescue a civilian doctor named Dr. Dilip Joseph who was kidnapped and held captive for one week by either smugglers or the Taliban in a remote village in Afghanistan?

Interestingly in light of Hammar’s situation being ignored by the Obama and his administration, there is another American soldier named Bowe Robert Bergdahl who has also been forgotten by Obama. Bergdahl was captured by the Taliban-aligned Afghanistan Haqqani network in June 2009. When was the last time you read or heard about him in the media? Is there a political pattern here based upon how Obama really feels about the our men and women in the military?

Behind closed doors, the government of Mexico must think what is happening to Marine Jon Hammar is funny…one of those Americans that are the brunt of the latest jokes on Mexico’s version of “Saturday Night Live”. No love lost on their part for this Marine. The government of Mexico is sternly embracing and using trivial legal arguments to keep Hammar incarcerated and tortured. Hammar’s family has continually been exposed to blackmail and extortion demands. Not a problem for the government of Mexico.

Other reasons for dragging this injustice on might very well be Mexico’s goal to publicly shame the United States which if the case, has to be fueled by Mexico’s subliminal hate of America using Hammar as a public display of such hate. The American public, the American military, and in particular, members of the United States Marine Corp should begin to wonder if President Obama’s silence concerning Hammar is indicative of the same.

If this is not the case, then as Commander In Chief, President Obama needs to back up his patriotic love America and the military speeches by considering a “Seal Team 6″ rescue mission of Hammar because right now, the government of Mexico and the cartels who control the police in Matamoros Mexico who arrested Hammar for no good reason, appear to have agreed together not to release him. In fact, they are acting just like the enemies in Iraq and Afghanistan that United States Marine Jon Hammar fought against.

A real friend of America would admit to their wrongs and make things right. Not to do so is the deliberate and intentional act of an enemy and therefore they should be dealt with as such for the sake of this Marine. President Obama needs to decide who’s side he is on.